In recent years the road to WrestleMania has included the Royal Rumble and Elimination Chamber, however in a change to arguably the most important part of the year for WWE as they build to the big event, the Chamber has been replaced for WWE Fastlane. Even without the draws of the WWE World Heavyweight Champion, Brock Lesnar or the chamber itself, Fastlane lived up to expectations and started the campaigns of many of the big storylines going into WrestleMania 31 – five weeks away.

Fastlane was different firstly as it was completely free via the WWE Network and for UK users on Sky. WWE UK’s broadcaster offered the event free to Sky customers on Sky Sports instead of on Box Office, and in a very generous move, even offered it on their Sky1 channel, which is available without a Sky Sports subscription. Charging £17.95 for an event when it is free on a platform where there is no commitment is not clever business.

To start the night, Seth Rollins and Authority cronies Big Show and Corporate Kane were successful over the recently re-hired Ryback, Erick Rowan and Dolph Ziggler. Even though the team were eventually buried by the corporate team, Ziggler again excelled and proved it is rare for him to have a bad match – the same can be said about Rollins. Nonetheless, The Authority with J&J Security looked strong during the match and even after the bell tried to continue the attack. However a returning Randy Orton put a stop to the attacks, causing Rollins to bolt out of the building. No doubt we will see Seth Rollins against Randy Orton at WrestleMania in San Fransisco.

Up next was brother against brother as Goldust took on Stardust as their father, the American Dream Dusty Rhodes watched on. The match was built up on Goldust’s torment in having to beat his brother to bring back Cody, so the match featured very little wrestling, instead lock-ups, shoves and Stardust’s internal battle against the fan’s Cody chants. It was a very poor finish with a botched referee count where he counted to two but awarded Goldust with the victory. However it seems they too could be building towards a WrestleMania storyline, having little contact and saving it for Mania. 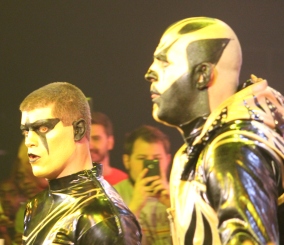 Stardust and Goldust will continue their rivalry into WrestleMania

A title change came next as the WWE Tag Team Championships were won by the newly formed team of Cesaro and Tyson Kidd. Both teams had strong performances with some big moments – as you’d expect from the Usos et al. Cesaro has had a 2014 to forget even with winning the Andre the Giant memorial battle royal at last year’s WrestleMania, after which his success was never built upon. However both young men have talent in abundance and are worthy tag title winners – even if Cesaro should arguably have a singles push.

Triple H made his way to the ring for what was no doubt one of the highly anticipated segments of the show, as he had his confrontation with the Icon, Sting. Hunter stepped away from his COO duties, wearing his street clothes and his hands taped up ready to fight. This is being built as WCW against WWE, as Triple H refers to both men as the franchises of their respective company. However in an effort of rationale, Triple H offered to forget Sting trying to ‘kill his company’, if he sided with the Authority. Along with this, all the merchandise, DVDs and Network opportunities available as well as a place in the Hall of Fame. However Sting declined and Triple H attacked the vigilante, and when he looked for his sledgehammer, Sting levelled with his baseball bat. Without a word said by the former WCW champion, just a gaze at the sign looming over the ring, a match at WrestleMania was agreed.

The silent treatment works really well for Sting as he lets his actions do the talking, and compliments his role within WWE and his character. The same worked well when Triple H challenged Undertaker for WrestleMania 27, neither man needed to say a word, their body actions and facial expressions told the story. 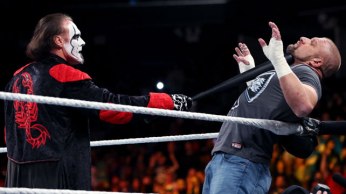 Sting confronts Triple at WWE Fastlane and challenges him to a match at WrestleMania 31 – Photo courtesy of WWE.com

The Divas Title match between Nikki Bella and Norwich’s Paige came next and was a short but albeit physical matchup with both divas maximising their minutes, proving they are more than just beautiful women but are impressive in the ring too. The Bellas continue their heel run with Nikki grabbing Paige’s tights to grab the win.

One of the last additions to the lineup followed with Intercontinental Champion Bad News Barrett taking on the lunatic fringe Dean Ambrose. Ambrose, who was looking to legitimise the title that he remembered from his childhood, secured the matchup after tying the man from Preston to the ring post and making him sign the contract. However Ambrose ultimately got disqualified after ignoring the referee’s five count. This could be another rematch we could see at the show of shows especially with Ambrose stealing the belt. Although that’s if BNB isn’t busy facing England and Manchester United captain Wayne Rooney!

Like an RKO, for some the next segment came outta nowhere! The familiar dongs and druids appeared and seemed to signal the arrival of the deadman. However when the casket opened it was young Bray Wyatt who revealed his recent vignettes have been aimed at the Undertaker. Only time will tell as whether the Undertaker responds and if he accepts the leader of the buzzards’s request for a match at WrestleMania. Many fans on Twitter and social media feel that now the streak is over it should be left alone. There is no doubt fans would love to see the Undertaker again and WrestleMania would arguably not be the same without the legend. However it is fair to say that this match is a lose-lose. If the Undertaker does return and wins, Wyatt will be buried deeper than ever – even more than when he faced Cena and was added to the long list. If Wyatt wins, it will further taint not only the streak but the career and legacy of the Undertaker and WrestleMania. If this is the direction WWE will go and the match will take place, WWE need to use these five weeks correctly and tread carefully with the two characters. Nonetheless with the similarities and the darkness of both characters, it will definitely be a top match, but maybe a year too late. 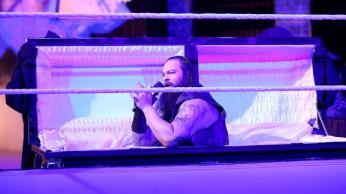 It’s highly likely that Rusev had a nosebleed before the United States title match, with the belt never being so high on the match card whilst being contested for. However his opponent and challenger was John Cena, who Rusev confronted after the Royal Rumble on the Fallout show, starting the feud. There is no doubt both men are impressive physical specimens and that has shown in their confrontations. Nevertheless, John Cena needs to stop revealing spots. His direction to Rusev was a constant throughout the match and could be clearly heard, and Cena as great as he is, is a repeat offender. It is fair to say though that most fans predicted the finish for the match with John Cena loosing via submission not tapping out however, but through passing out, party due to a low blow and a kick to the head prior to the Accolade hold. Yet again, it looks like WrestleMania this year from Levi’s Stadium will be the showcase of the rematches.

Without a world title on the line, the two men who want to face Lesnar for the championship at Mania faced off in the main event. Although Reigns won the Royal Rumble this year, the important part of the Rumble to many was Bryan being eliminated and looked over by WWE, especially when he never lost the title. Therefore, WWE capitalising on the popularity of Bryan put the two against each other to determine the Number 1 Contender. Bryan and Reigns created a physical matchup with Bryan’s wrestling skills and Roman’s pure strength. It wasn’t as clear as some predicted, with fans being split pretty equally in their allegiance, chants were strong for both competitors. There is an argument to say Bryan made Reigns look good with his incredible ring craft along with great selling from the duo. This made the former Shield man’s victory far more meaningful whilst meaning all is not lost for Bryan who managed to save face. Last year after Roman Reigns made a big impact in the Royal Rumble, I said he would be in the main event at the 31st WrestleMania. In this match alone he proved he is worthy of the opportunity.

The next time WWE will be live on pay-per-view will be WrestleMania 31, live from the home of the San Fransisco 49ers football team. Whilst there may be some rematches from this card featuring at this event, expect some great programming before them as WWE always excels at this time as they look to build to their biggest and most important event. Then its the Superbowl style, entertainment extravaganza that will still hold a surprise or two.