The wait was finally over and the grandest stage of them all was set for the biggest event in sports-entertainment, WWE WrestleMania 31. Going into WrestleMania there were so many questions, how will Sting fare against Triple H in his very first WWE match, what condition would the Undertaker be in following the shocking defeat last year, and would Roman Reigns defeat The Beast, Brock Lesnar. We got all the answers and more in one of the best WrestleManias in recent memory, and some believe all time.

WrestleMania was proceeded by a two-hour kick off show in the baking sun of California, from the home of the San Francisco 49ers, Levi’s Stadium. The four team match for the WWE Tag Team Championship again kicked off the event with Tyson Kidd and Cesaro retaining their titles. Whilst The Usos were advertised to compete and did, with Jey Uso’s injury a week prior, he was quickly cast to the side leave Jimmy to fight for the team. However the solo Uso nor Los Matadores or the New Day could stop Kidd and Cesaro’s dominance. 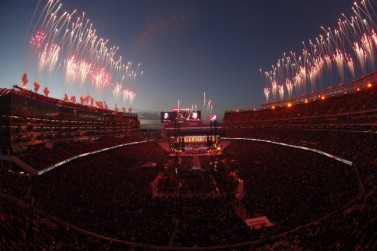 Unfortunately, next came the Andre the Giant Memorial Battle on the kickoff show. It was such a shame to hear this match had been moved to the kickoff show. The origins of the Battle Royal were to pay tribute to and honour the legacy of WWE’s biggest and very first Hall of Famer. However being placed on the new rendition of Sunday Night Heat is far from paying homage to the late great Andre The Giant. It’s placement on the card was almost as bad as Big Show winning the event after eliminating Damien Mizdow who used the sports-entertainment spectacle as his place to renounce his partnership with The Miz.

Although my prediction of Sheamus returning and using the Battle Royal as his stage were not correct, Mizdow and Miz were one of the few remaining competitors. Nonetheless, it was a disappointing Battle Royal, not only for where it was on the card but also for who won it. If it does make a return next year, hopefully WWE will give it the importance it should have and use it as a catalyst for one the next big stars.

After the obligatory national anthem from Aloe Blacc, and a brilliant introduction from LL Cool J, WrestleMania 31 opened with the Intercontinental Championship Ladder Match. With so many competitors, the odds for Bad News Barrett to retain were slim, this was worsened when you consider opponents like Daniel Bryan, Dolph Ziggler, Dean Ambrose and more. When all was said and done, and after some great high-flying moments with Ambrose breaking a ladder in half, Daniel Bryan walked out of Levi’s Stadium and WrestleMania as the new Intercontinental Champion. The hot potato with the championship belt has given some buzz back to title – as well as the big names involved in the match. Now with Daniel Bryan, who left WrestleMania XXX as World Heavyweight Champion, holding the title, hopefully the Intercontinental Championship will return to the level of status and prestige of eras and superstars gone by.

Up next came The Viper, Randy Orton up against former Authority stable mate and Mr. Money In The Bank, Seth Rollins. This matchup, although it felt rushed, was a brilliant display of athleticism and the RKO at the end has resoundingly been named the best RKO ever. Randy Orton picked up the victory against Seth Rollins, who we all thought we had seen the last of – more on that later.

Quite unexpectedly followed the showdown between the two franchises of WCW and WWE, Triple H and the Icon, Vigilante Sting, Unfortunately Sting’s cards were marked before the bell had even rang, as Triple H adopted an impressive entrance with The Terminator himself, Arnold Schwarzenegger, which almost made Triple H a face and Sting a heel. Matters weren’t helped with a reunion of D-Generation X to help Hunter. However quite predictably, three WCW guys would come to even out the sides and back up the Stinger. However it wasn’t just any WCW guys, it wasn’t Disco Inferno or The Yeti but the original nWo – Hulk Hogan, Scott Hall and new Hall of Famer, Kevin Nash.

Nonetheless, it wasn’t enough and the COO of the WWE was victorious. In my WrestleMania preview, I predicted Sting would win because a loss would not harm Triple H and would give the legendary WCW guy, a WrestleMania and WWE moment in his first match for the company. However it seems this won’t be the last time we see Sting, as if this was his last match, it certainly wouldn’t have ended that way and Sting would have been in a better position to win.

However, with WWE looking to break the attendance record of WWE and the AT&T Stadium next year as they host WrestleMania 32, WWE will need all the star power they have to bring in over 100,000 fans to the show of shows. But many wondered what condition Sting would be in and if he could compete in WWE. Although he lost, Sting showed that he is still agile and quick in the squared circle. The other elements such as DX and the announce team burying and undermining Sting certainly didn’t help him.

Divas action came next as The Bella Twins took on AJ and Paige in a very physical match where it was important for Paige and AJ to defeat the sisters to establish opponents for the Divas Titles and adversaries for Bella Twins. The Bella Twins have been dominating the divas division and have been in control of Divas Championship. With the victory for the former Champions themselves, it shows the Bellas can be broken.

In a rematch from WWE FastLane, United States Champion Rusev faced off against John Cena as he looked to return the coveted United States title back to the United States. The fact that the 15-time world champion is now competing for the very first title he won in WWE back at WrestleMania XX, will begin to raise the profile again of the U.S. Title. Both men had an impressive match as Cena became not only the first man to break Rusev’s Accolade submission but the first man to defeat the Russian sympathiser. It was thanks to interference from Lana inadvertently again that caused Rusev to fall short to the leader of the Cenation.

With Daniel Bryan as the new Intercontinental Champion and John Cena winning the United States Championship means the value and weight of both championships has instantly improved. With Brock Lesnar in the title picture it means that when he is not at an event a title match can still take place. Having bonafide main event stars win the championships was vital in making that happen and helping to turn the tides on WWE’s singles titles.

Triple H returned to the ring with wife Stephanie McMahon to reveal WWE WrestleMania has broken the attendance record for Levi’s Stadium with 76,976 fans watching history take place, from all 50 states and 40 different countries. However once they accredit themselves key to the success, out comes The Rock to confront The Authority. However when Stephanie uses her corporate weight, Rock calls on UFC star Ronda Rousey to sort out both the COO and his McMahon wife. Although this segment ran on a bit too long, it was great to see The Rock in his usual comedic style crossing over with UFC, not for once with Brock Lesnar or mentions of a certain CM Punk.

Following on from one legend was another as the Undertaker returned to WWE and WrestleMania to take on the self-proclaimed new face of fear, Bray Wyatt. Unlike previous years, this is the first time we saw Undertaker who sporting a retro look, similar to when he returned to the dark character at WrestleMania XX. Although a knee brace was obvious on the Deadman, the Undertaker looked great and in better shape than he did last year against Brock Lesnar – are WWE regretting finishing the streak?

Undertaker returned to WrestleMania to take on the new generation’s Taker – Photo Courtesy of WWE.com

Nonetheless it was a great performance from both men who drew on their similarities in their characters to create some special moments during the match. Wyatt was a worthy competitor and gave Taker a battle but unfortunately came up short against the Undertaker. It was clear to see following the match that no mention was made to 22-1 and no graphics were around the stadium. It seems now it is over, WWE are no longer referencing it. 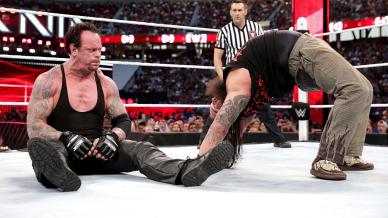 This was one of the matches that showed one of the biggest flaws and downsides of this year’s WrestleMania – it wasn’t dark enough. For most the event the sun was beaming down just like a summer’s day. Whilst for many of the matches it won’t make much of a difference but it completely ruined both Wyatt and Undertaker’s entrance and did give the same atmosphere to the event. Plus early on fans on one side struggled to see the ring due to the bright sunshine.

However by the time we came to the main event it began to get darker as Roman Reigns made his way to the ring to compete against Brock Lesnar for the WWE World Heavyweight Championship. The crowd’s reaction to Reigns was clear and is similar was he has heard since his victory at the 2015 Royal Rumble. From early on Brock Lesnar dominated Roman Reigns taking him to “Suplex City”, a phrase Lesnar coined.

But with every suplex and big time move, Reigns would smile and grin before working on the offence. The biggest surprise would come from Seth Rollins who decided to cash in his Money In The Bank opportunity, making the main event a Triple Threat Match. Curb stomps later and importantly a pin over Roman Reigns means Rollins is the new WWE World Heavyweight Champion.

Whilst it was an exciting moment and something that has never happened at WrestleMania before, the fact he lost earlier in the night in a very physical match is almost forgotten as he claims the richest prize in the company. But nonetheless Seth Rollins was the key superstar of the Shield faction and the World Heavyweight Championship is in safe hands as he now faces rematches against Brock Lesnar and challenges from the likes of Roman Reigns and Randy Orton.

With such an action packed WrestleMania with so many big names competing and winning gold, as well special appearances and entrances you’ll only see at the grandest stage, it’s not hard to see why some people are regarding this as one of the best WrestleMania events.

Now we will how Seth Rollins develops as WWE World Heavyweight Champion under the protection of The Authority, and how he will build a rivalry against former champion Brock Lesnar. Further ahead, WWE will have lots of work to do to prepare for next year’s WrestleMania in Texas to get the 100,000 attendance they want for WrestleMania 32.